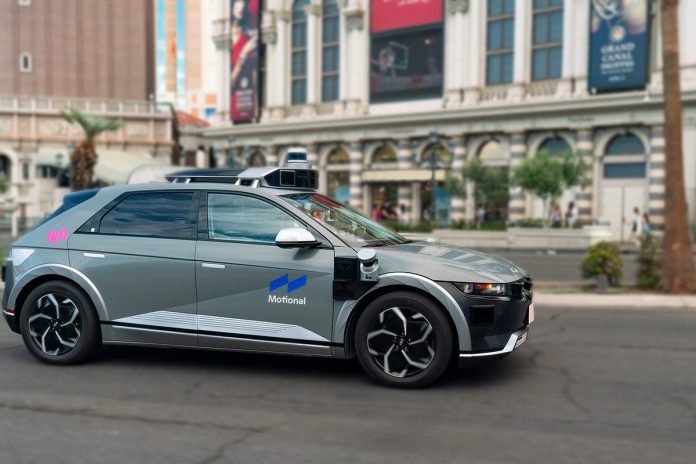 Motional, Hyundai Motor Group and Aptiv’s autonomous driving joint venture, has announced that its IONIQ 5-based robotaxis have launched on Uber’s ride-hailing network. Accessible through Uber’s smartphone app for compatible iOS and Android devices, rides in the robotaxi will be offered first to users in Las Vegas, NV.

For Uber, the launch marks the first implementation of an autonomous vehicle (AV) into its service, while representing a key step in its further plan with Motional to launch a driverless service in 2023. The service is one part of a wider, decade-long, deal between the companies that will see Motional’s autonomous vehicles more deeply integrated into Uber’s ride-hailing operations as well as its food delivery service, Uber Eats.

Uber Eats was the focus of an earlier partnership between the companies, in which AVs were used to deliver orders to customers in Los Angeles, CA. The collaboration proved successful, expanding its service area and restaurant partners over time (with a similar pilot now being conducted in Santa Monica) while increasing public awareness and interest in vehicle autonomy. If successful in Las Vegas, Uber and Motional intend to expand its robotaxi project to Los Angeles, though this will require them to achieve the necessary permits from California’s DMV to test and commercially operating an autonomous ride-hailing service in the state.

The AV itself is an IONIQ 5 EV equipped with Motional’s autonomous driving system comprised of 30 external sensors – including cameras, radars, and LiDAR systems. In each vehicle, a safety driver will oversee the robotaxi’s autonomous operations and intervene only when necessary. If it should encounter unexpected road conditions such as roadworks or flooding, for example, the driver will take over and guide it to safety before handing the driving task back to the vehicle.

While users cannot specifically request a ride in the AV, the companies confirmed that they will have the chance to hail one through UberX and Uber Comfort Electric – Uber’s premium taxi options. If the user selects either option and is matched with the Motional robotaxi, the app informs them accordingly – providing a prompt that allows them to opt-in to taking a ride with it. Upon opting in, the ride is confirmed in the app before the AV is dispatched to their designated pickup point. While these autonomous rides will initially be offered for free, as part of its early launch, both Uber and Motional advised that they will begin charging for them further down the line.