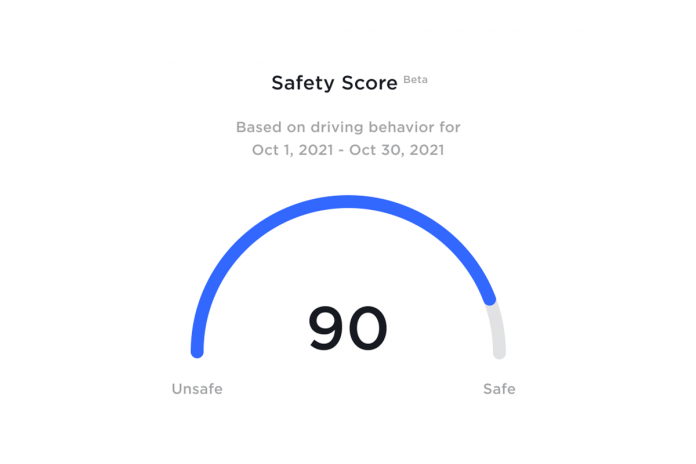 As part of a new OTA software update, Tesla has launched a beta version of its new Safety Score system alongside the previously announced Full Self-Driving (FSD) Beta Button. The launch of the button comes after several delays and follows the release of Tesla’s FSD Beta.

When tapped, the button allows Tesla drivers in the US who have purchased FSD Capability to request access to its Beta testing program. To gain this access, however, the driver must receive a satisfactory score from Tesla’s new Safety Score system (based on seven days of driving). The system, which is also in its beta phase, independently assesses the user’s driving behavior and provides real-time feedback based on five Safety Factors: Forward Collision Warnings per 1,000 miles, Hard Braking, Aggressive Turning, Unsafe Following, and Forced Autopilot Disengagement. Each factor is measured through the vehicle’s sensors and Autopilot software. Together, they estimate the likelihood of the user’s driving resulting in a future collision (determined through a Predicted Collision Frequency formula that predicts how many collisions may occur for every one million miles driven by the user).

Ultimately, this assessment results in the system providing the user with a daily Safety Score valued from 0 to 100, with a higher score indicating safer driving. Over time, for a period of up to 30 days, these daily scores are combined to calculate an average Safety Score that can be viewed in Tesla’s smartphone app. While Tesla estimates that the majority of its drivers will achieve a minimum of score of 80, CEO Elon Musk confirmed that, initially, a perfect Safety Score of 100 would be required to access the FSD Beta. However, Musk also confirmed that this requirement would be relaxed over time to a minimum score of 99, 98, and so on.

From October 8, following the next update of the FSD Beta (10.2), Tesla will broaden the accessibility of the Beta – enrolling 1,000 eligible users into it every day prioritized by their Safety Score.