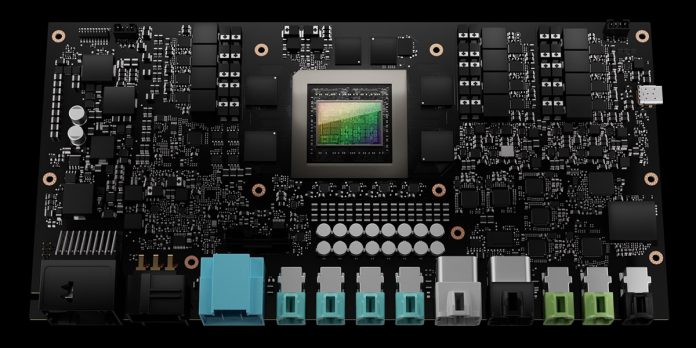 Nvidia has unveiled NVIDIA DRIVE Thor, its next-generation centralized computer for autonomous vehicles. Capable of achieving up to 2,000 teraflops of performance, it unifies a range of functions — including automated and assisted driving, parking, driver and occupant monitoring, digital instrument cluster, IVI, and rear-seat entertainment — under a single architecture. In adopting this architecture, the technology company expects OEMs to benefit from greater efficiency and reduced system costs.

The superchip will be made available for use in 2025 model year vehicles and help accelerate production roadmaps by bringing higher performance and advanced features to market in the same timeline. Geely-owned ZEEKR announced it will be the first OEM to integrate DRIVE Thor on its centralized vehicle computer for its next-generation EVs, which are expected to enter production in early 2025.

Drive Thor will be Nvidia’s first AV platform that will incorporate an inference transformer engine, a new component of the Tensor Cores seen in Nvidia’s GPUs. With this engine, it can accelerate the inference performance of transformer deep neural networks by up to nine times. It is through this capability that Nvidia aims to support the large, complex, AI workloads associated with self-driving vehicles. Another feature of Drive Thor is its 8-bit floating point (FP8) capability. Typically, developers lose neural-network accuracy when moving from 32-bit FP data to 8-bit integer format. Drive Thor features 2,000 teraflops of FP8 precision, aiding the transition to 8-bit without compromising on accuracy.

Nvidia’s new superchip also uses the latest NVLink-C2C chip interconnect technology, while running multiple operating systems. For Drive Thor, the NVLink-C2C can share, schedule, and distribute work across the link with minimal overhead. This will allow automakers to build software-defined vehicles that are continuously upgradeable through over-the-air updates.

The Drive Thor SoC and AGX board are developed to comply with ISO 26262 standards, with the software stack is designed for both ISO 26262 and ASPICE compliance. The Thor SoC and software are also designed and produced in alignment with ISO 21434, which provides the pathway for compliance with regulatory security such as UNECE Regulation 155.

At launch, Drive Thor will replace Drive Atlan, and be the follow-on to Drive Orin. Existing Orin customers can take advantage of the platform’s scalable architecture to easily transition their workloads to Drive Thor.