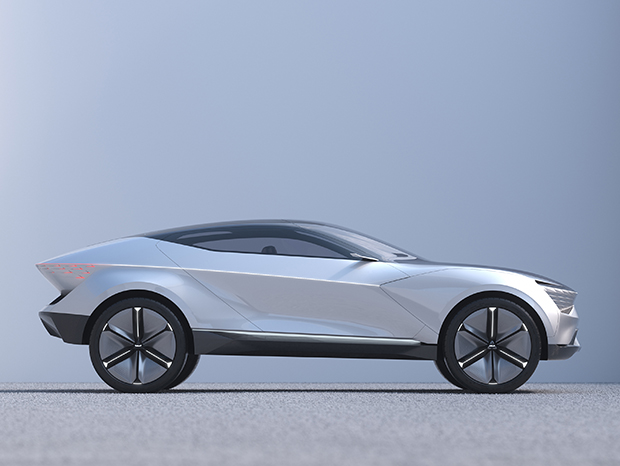 The Futuron Concept represents the modern and confident image of a progressive electric SUV coupe envisioned by Kia. The Futuron name itself is a portmanteau of ‘future’ and ‘on’, hinting at the switched-on, electric nature of future SUV designs from the brand.

A sports car on an SUV platform, combined with comfortable, lean-back seats, Futuron offers users a new type of interactive driving experience suitable for urban city environments. Various elements of the vehicle’s structure and design foster the important connection and interaction between car and driver.

The front fender flows backwards from the front of the hood before plunging into the cabin itself, establishing a connection between the driving seat and the road ahead. The concept’s roof is a diamond-shaped panoramic glasshouse which sits atop the 360-degree core, in the best traditions of UFO and flying saucer design. While flooding the cabin with natural light, it also extends down the bonnet to give drivers an unparalleled view ahead. The glasshouse also incorporates a network of LiDAR (light detection and ranging) sensors capable of providing Level 4 autonomous driving features, enabling hands-off and eyes-off driving in most conditions.

Furthermore, the 360-degree theme is evident in the lighting that illuminates a sharp character line encircling the Futuron’s body. A playful and interactive new feature, this lighting responds to physical gestures and movements made outside the car, eliciting a close connection between vehicle and driver before they even set foot in the cabin.

With a wider ‘tiger face’ shape, the grille incorporates the Futuron’s headlamps, an innovative ‘Star Cloud’ design which gives the car a dazzling new night-time identity. The concept’s Star Cloud lighting not only highlights a new design form for the front of the car, but also embodies a new lighting concept for Kia, taking inspiration from nebulae in the night sky to create a geometric patchwork of matrix LED lighting. The Star Cloud is also incorporated into the rear of the car, displaying a distinct light signature to anyone following the Futuron.