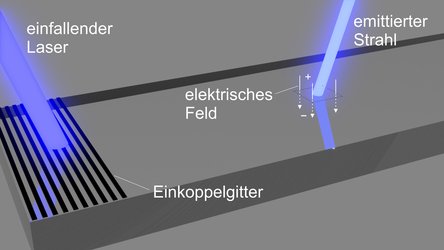 Whether optical environment recognition in autonomous driving or the support of activities by means of VR (virtual reality) and AR (augmented reality) such as in the maintenance of complex industrial plants – optical applications and their optimization play a major role in digitization Role.

In the “ActiNode” project, scientists from the Bergische Universität Wuppertal under the direction of Prof. Dr.-Ing. Patrick Görrn, Chair for Large-Area Optoelectronics, the prerequisites for a new display and sensor technology, the use of which should offer a wide range of further possibilities in the field of optics in the future. Research focuses on actively switchable waveguides for laser scanners and displays. The project will cost around 1.1 million euros in total. Euro funded by the Federal Ministry of Education and Research in the framework program “Photonics Research Germany”. The term is two years.

If light is to be guided over long distances with little loss, fiber optic cables are usually used. Its best-known representative, fiber optics, forms the basis of today’s information age. In the ActiNode project, a new approach of so-called actively switchable node waveguides (ActiNode) is being pursued. “In the waveguides examined, which can be imagined as thin plates or flexible foil, the laser light from a separate source, for example a simple laser diode, is guided over a surface without loss,” explains Prof. Görrn. Lossless initially means that no light leaves the waveguide. “At individual local points, however, the light can be extracted by local electrical switching.

The scientists are now taking a closer look at the underlying effect and the micro-optical system behind it in order to improve the waveguide films for later industrial use. The main focus is on reducing the operating voltage. Another aim is to develop a system that can later be produced in large areas using simple and inexpensive methods.

The realization of large-area waveguides that can be switched at low voltage ultimately helps to advance the development of many applications in optics: If light can be extracted from a precisely controllable point, it can become a luminous pixel in a display, for example. In the case of laser displays, the method leads to significantly better color rendering and, through targeted use, i.e. without wasting light, it also leads to more cost-effective, more efficient and lighter displays.

The latter has great potential for sensor applications in the automotive sector, for example in autonomous driving. So far, mechanical sensors have been used in this area, but the new approach works entirely without mechanical movement. On the one hand, this increases the speed by several orders of magnitude, and on the other hand, a significantly longer service life can be expected.