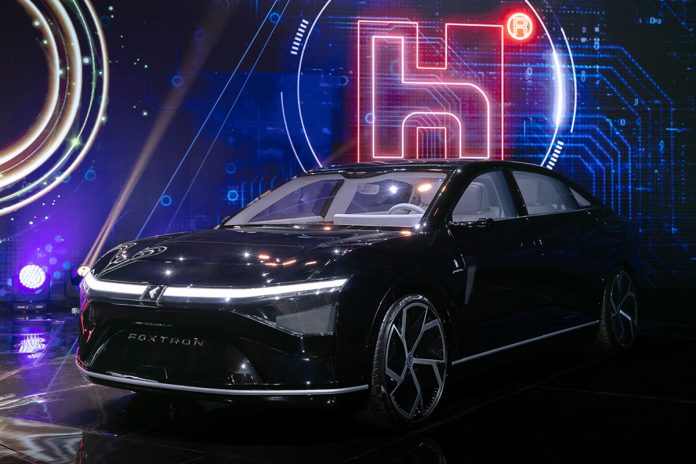 The Hon Hai Technology Group, also known as Foxconn, has revealed three new prototype EVs – the Model C, Model E and Model T. The C and E models serve the passenger vehicle sector as a SUV and a sedan, while the Model T provides a solution for the commercial sector as an all-electric bus. All three vehicles will be based on MIH, Foxconn’s open hardware and software EV platform, and serve as a foundation for Foxconn’s clients and partners to develop their own EVs on.

Foxconn’s prototype EVs were announced at the 2021 edition of its Hon Hai Tech Day event and were developed under Foxtron, a JV between itself and Yulon Motor. At the event, it confirmed that two of Yulon’s vehicle brands, Luxgen and CMC, would be the first key partners to adopt Foxtron’s product platform. The reveal follows a number of motions from Foxconn in a push to enter the EV sector. In addition to forming partnerships with Fisker and PTT (Taiwan’s state-owned energy company), Foxconn acquired a plant in Ohio formerly owned by Lordstown Motors and a semiconductor factory in Taiwan from Macronix International.

Foxconn positions the Model C, the first EV built on MIH, as an intrinsically optimized electric SUV. It is envisioned as an urban EV which Foxconn hopes users will use to navigate crowded city areas. In addition to offering the largest available storage space of Foxtron’s two passenger models, the Model C provides consumers with an extended driving range of 700 km (435 miles) and a 0 – 100 km (62 mph) time of 3.8 seconds. It is expected to launch in the Taiwanese market in 2023 under one of Yulon’s brands, retailing for NT$1 million ($357,000).

Jointly developed with Pininfarina, the Model E is billed as a technology-centric sedan for middle- and high-end consumers and businesses. The EV’s technological approach comes from its ability to connect with the user’s mobile device, enabling a suite of infotainment and security features. These include a facial recognition system for opening the doors, smart windows and vehicle and environment interfaces. Another key feature of the prototype is found in its rear seat space, which can be reconfigured into a mobile office. The sedan will deliver an estimated power output of 750 hp, resulting in a 0 – 100 km time of 2.8 seconds, and provide users with a maximum range of 750 km (466 miles). While no release date or price point has been confirmed for the Model E, Foxconn did confirm that it will be sold by an unspecified OEM outside Taiwan in the coming years.

The Model T is positioned by Foxconn as an intelligent transportation solution. Likewise, the electric bus is the closest of the three models to entering the market. This is because it has already completed more than 200,000 km (over 124,247 miles) and 1,000 hours of rigid strength tests at Taiwan’s Automotive Research and Testing Center. Foxconn has said that the bus could even start running in Kaohsiung as soon as next year if it passes the transport ministry’s review. In a similar fashion to Foxconn’s other prototypes, the Model T’s specifications work to its purpose as a commercial vehicle. Its battery, for instance, can withstand temperatures of up to 400 degrees across a 400 km (248 mile) range. Under its full load conditions, the bus can reach a maximum climbing capacity of 25% and support a top speed of 120 km/h (74 mph).

Foxconn has said that it will produce EVs near the markets they are sold in to reduce manufacturing costs. For example, at its new Ohio plant, it aims to manufacture the Lordstown Endurance pickup truck and a selection of EVs for Fisker by the end of 2023. While EV production plans for Europe were not detailed at Hon Hai Tech Day, Foxconn did confirm that these plans would be announced at a later date.