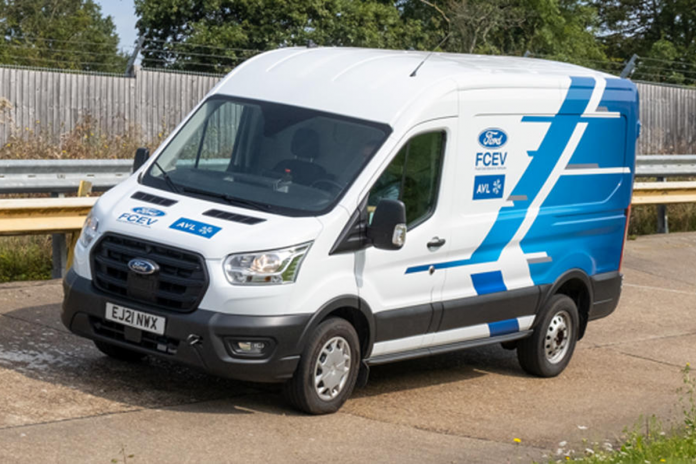 Ford has revealed a FCEV version of its Transit van that will be powered by hydrogen. The van has been built in collaboration with AVL, a powertrain testing specialist based in the UK, to research the feasibility and potential use cases of FCEVs in the commercial vehicle sector. The project, which has received funding from the Advanced Propulsion Centre, also seeks to develop the UK’s understanding of FCEVs to support the country’s transition to zero emission propulsion systems.

For the project, AVL is working to define the balance of plant components and integrate the fuel cell and hydrogen systems into the vehicle. It will also develop a digital toolset, consisting of a coupled vehicle as well as fuel-cell and cooling subsystem models. The Transit FCEV itself is a modified version of a prototype Ford Transit BEV. It will take advantage of a modularized fuel cell system approach, based on a system developed by AVL themselves. This approach involves the replacement of the Transit BEV’s battery with a smaller EV battery and the installation of a proton-exchange membrane (PME) fuel cell system – the BEV’s electric motors will be retained for use in the project. At the same time, AVL will leverage a simulation approach to continually develop the FCEV – ensuring that the appropriate battery and balance of plant components is selected and used throughout the project’s duration.

Through its testing of the Ford Transit FCEV, AVL will assess the benefits of FCEVs against the benefits of BEVs. This comparison will test the range, charging speeds and payload capabilities of each vehicle type to determine which one is better suited for high-payload usage in the LCV sector. Likewise, AVL aims to aid the development of future FCEVs through the project’s findings – identifying the ideal sizing of components, such as the battery and fuel stack, to achieve near-optimal vehicle configuration.